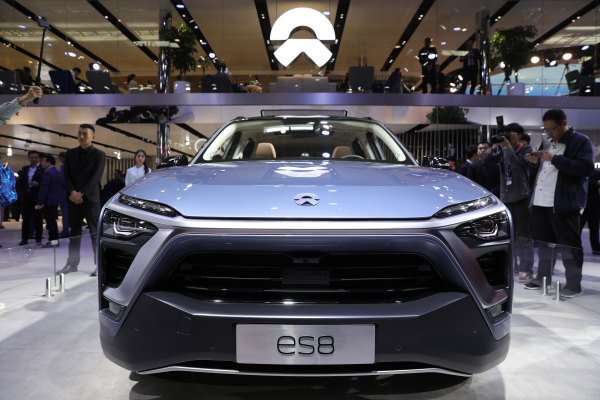 Nio delivered 4,799 vehicles in the third quarter, a 35.1% surge in sales and a positive development for the Chinese electric automaker that has been plagued by cost overruns, a voluntary battery recall and macroeconomic conditions such as declining passenger vehicle sales and reduced EV subsidies.

The company said Tuesday it also exceeded the middle point of its guidance range by 499 vehicles, or 11.6%.

The deliveries sent Nio shares up more than 9%. However, Nio shares, which were trading at $1.69 on Tuesday prior to the market close, are still down some 49% from just a month ago.

Nio founder, chairman and CEO William Li credited more “competitive retail prices” on the ES6 for contributing to the jump in deliveries. He added that the company began in October delivering ES6 and ES8 vehicles with an 84-kWh battery pack that extends their range to 316 miles and 276 miles, respectively. Li expects these longer range vehicles to accelerate orders and deliveries in the fourth quarter.

Nio has struggled to hit its own guidance in previous quarters. Nio began deliveries of the ES8 in China in June 2018. And while deliveries initially surpassed expectations, they slowed in 2019. The company reported loss of $390.9 million in the first quarter. The rout continued in the second quarter when Nio reported a loss of $462 million.

Nio’s response to its dismal numbers has included shifting its vehicle production plans, reducing R&D spending and cutting thousands of jobs. The company plans to cut its workforce from 9,900 people down to 7,800 by the end of the third quarter, Li said in September when reporting its earnings. He also said there will be additional restructuring and some non-core businesses will be spun off by the end of the year.

In June, Nio faced a new problem when it voluntarily recalling nearly 5,000 of its ES8 high-performance electric SUVs after a series of battery fires in China and a subsequent investigation revealed a vulnerability that created a safety risk. The recall affected a quarter of the ES8 vehicles it has sold since they went on sale in June 2018.

Nio was able to complete its recall for the 4,803 ES8s by prioritizing battery manufacturing capacity for this effort. But that significantly affected production and delivery results, Li said at the time. Nio delivered just 837 electric vehicles in July.

But even before the recall, delivery numbers were down. Nio delivered 1,340 vehicles in June, 1,089 in May and 1,124 in April. Those numbers rebounded in September when Nio said it delivered 2,019 vehicles.

It’s unclear if these rosier numbers signal the beginning of a broader turnaround for Nio, which has accumulated about $6 billion in losses since its founding in 2014. Sales of EVs in China continue to slide, a fall blamed on a reduction in subsidies.