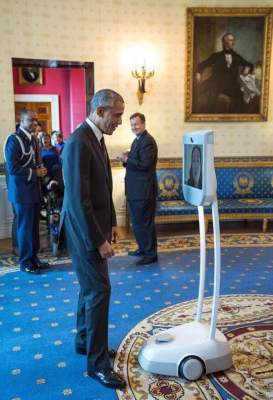 
Beam, a telepresence robot with a screen that a person can remotely control and use to communicate via video, became a breakthrough success in the world of robotics in part because of its role in helping high-profile, but movement-limited, people like Edward Snowden better communicate with the outside world, and disability rights activists meet with world leaders. Now, the control of Beam the product itself is changing: Suitable Technologies, the creator of the Beam, is selling it to Blue Ocean Robotics, a Denmark-based developer and incubator that describes itself as a “Robot Venture Factory.”

In an interview we conducted via a Beam robot — where I dialled into Blue Ocean’s offices and navigated a Beam from its docking station around the office and into a private room — Blue Ocean’s CEO and co-founder Claus Risager said his company is not buying Suitable itself: the deal includes only the IP, staff who work on Beam robots, hardware inventory and other related assets. Currently, there are a few versions of the Beam on the market: the two main categories are a smaller robot that is priced around $2,000-$4,000, and a larger Beam Pro that sells for around $15,000 per machine.

The key with Blue Ocean’s development to date is that it has built a “toolbox” (Risager’s term) that it uses to build different robotic hardware — one of its most successful has been its UVD Robot that can perform remote, ultra-violet-based disinfection in hospitals and other infection-prone environments — that it will be using to develop iterations of the Beam. That could mean that long-rumored ideas of the Beam getting robotic arms and other appendages could be coming at some point.

Suitable Technologies, meanwhile, was founded by Scott Hassan, a robot enthusiast that was an early investor in Google, a software engineer (he was a key figure in Google’s early search development and had built Yahoo Groups) and an entrepreneur who founded the now-defunct Willow Garage before Suitable Technologies: both Willow and Suitable have been privately financed by Hassan himself.

Hassan is known for being somewhat media shy, and he declined to respond to requests for comment on what will happen with Suitable Technologies now that the only product that it has developed and released to date is getting sold. Risager also declined to talk about why his company acquired just the product but not the company behind it, but he noted that the two companies had been working in partnership for some time already to help distribute the Beam in Europe, where it is used in settings like hospitals as well as other enterprise and industrial applications.

“Our logic behind the purchase is that we have a large customer base ourself and every one of them is buying more Beams and discovering more applications for it,” Risager said. “This is proof for us that there is big growth in this market and that is why we believe in it.”

In a statement provided by Blue Ocean, Hassan described the sale as a “multi-year partnership”, which seems to imply that Suitable will be sticking around for a while more, although it’s not entirely clear if he’s referring to the past or the present in the statement.

“Through our multi-year partnership, I am confident that Blue Ocean Robotics has the commitment, knowhow, and passion to support current Beam customers, acquire new customers, and build the business into new areas,” said Hassan.

Financial terms of the deal are not being disclosed. Blue Ocean has raised only around $15 million in funding according to PitchBook, although Risager said the actual figure is actually closer to $30-40 million. It has a number of enterprise products already on the market that Risager said have made the company profitable to date, and so the purchase of Beam, and future development, will be financed internally. Risager said his company plans to invest “several million dollars” into the development and future of Beam.

But at a time when robotics as a startup idea has had some significant setbacks — recent shutdowns include Rethink Robotics, Anki, Keecker and Jibo — it seems that this is not the rule for everyone in the field. Risager told me that he has daily emails from firms that would like to take stakes in the company, and it seems that the startup has engaged with more than one large tech company that has approached it with M&A in mind.

“We started six years ago and have three products today,” he said, “and we expect in two years’ time one of them will be acquired or something like that. It’s a part of our business model: at some point these will be worth more to a large global company than to us.

“Everyone understands that in the next 10-20 years the robotics field will grow a lot,” he continued. The professional service robotics market is doubling ever year at the moment. It is currently quite small, with sales of around 100,000 robots annually, but with companies like Amazon and Facebook taking interest, you can see how is potential for a bigger enterprise, but also consumer, push. “I could have a serious conversation with potential investors every day, if I wanted to,” he said.