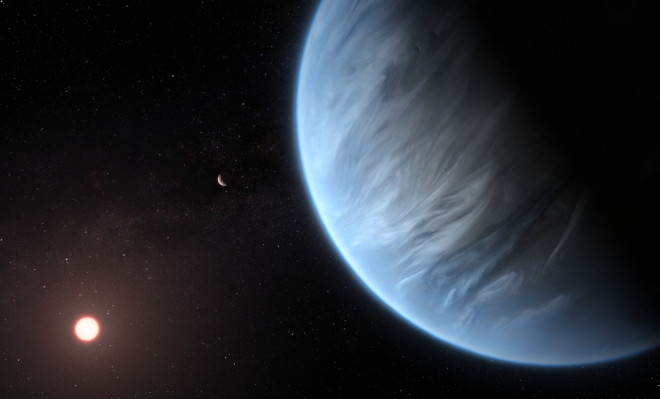 
Water is not uncommon to find in our galaxy in ice or gaseous form, but liquid water is quite rare — and liquid and gaseous water on an Earth-like exoplanet? That’s never been observed… until now. Astronomers spotted this celestial unicorn, called K2-18 b, using the venerable Hubble space telescope.

K2-18 b is a “super-Earth,” a planet with a mass and size approximately like our own, and not only that, it exists in its solar system’s “habitable zone,” meaning a range of temperatures where liquid water can continuously exist. It’s about 110 light-years away in the constellation Leo.

Researchers used past Hubble data to examine the spectral signature of light shining from K2-18 b’s sun through its atmosphere. They found evidence of both liquid and gaseous water, suggesting a water cycle like our own: evaporation, condensation, and all that.

To be clear, this is not an indication of little green men or anything like that; K2-18 b’s red dwarf sun is absolutely bombarding it with radiation. “It is highly unlikely that this world is habitable in any way that we understand based on life as we know it,” the Space Telescope Science Institute’s Hannah Wakeford told Nature.

Too bad — but that wasn’t what scientists were hoping to find. The discovery of an Earth-like planet with an Earth-like water cycle in the habitable zone is amazing, especially considering the relatively small number of exoplanets that have been examined this way. The galaxy is full of them, after all, so finding one with these qualities suggests there are plenty more where K2-18 b came from.

This discovery is an interesting one in another fashion: It was done, like lots of others are these days, by performing after-the-fact analysis on publicly available data (from 2016 and 2017), and the analysis used open-source algorithms. Essentially both the data and the methods were out there in the open — though naturally it takes serious scientific effort to actually put them together.

Two papers were published on K2-18 b, one from the University of Montreal and one from University College London. The former appeared on preprint site Arxiv yesterday, and the other was published in the journal Nature Astronomy today.