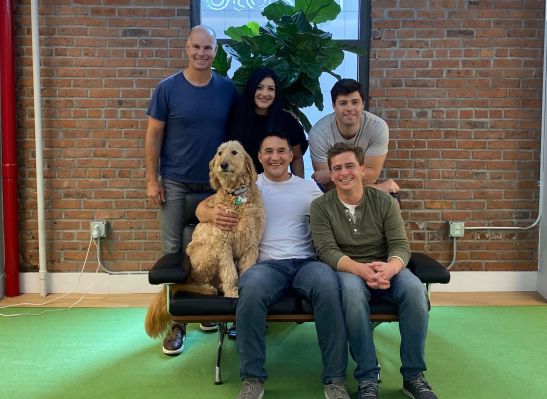 One fund is $112 million seed- and early-stage vehicle– the fourth of its kind. Boldstart also raised an opportunity fund for the first time to continue funding its best-performing startups. It was closed with $45 million in commitments from investors.

We talked late last week with cofounder Ed Sim yesterday about the small firm, which also includes cofounder Eliot Durbin; Jeffrey Leventhal, a partner who was previously a venture partner; Shomik Ghosh, who is joining the firm as a principal from a role as a senior associate with Top Tier Capital Partners; Max Heald, an investor who joined the outfit as a analyst in 2017; and its office head, Charlotte Chapanoff.

What we gathered from that conversation was three things. Boldstart’s focus on enterprise software is paying off, as is an extended network on which it relies heavily. The firm has also demonstrated a talent for picking smart founders, some of whom have come to Boldstart more than once for their very first institutional capital.

Consider Rahul Vohra. Backed by Boldstart, his email company Rapportive was eventually acquired by LinkedIn. A couple of years later, in late 2014, he spun up Superhuman, again with financial support from Boldstart. It’s an invitation-only email management service that costs $30 and received a glowing review in the New York Times this year.  It has also raised significant funding, including a $33 million Series B round led by Andreessen Horowitz that closed in early summer.

Another example? Guy Podjarny, founder of four-year-old, London-based Snyk, a company that helps organizations find and fix vulnerabilities in open source dependencies and container images and which has now raised $102 million altogether. Podjarny’s last company, Blaze.io — backed in part by Boldstart — sold to Akamai Technologies. When Podjarny started Snky, Boldstart’s office was one of his first stops.

Even lone founders — who VCs are often hesitant to fund —  are welcome by Boldstart if it believes in their vision. Among these is Pankaj Chowdhry, the founder of San Francisco-based FortressIQ, a two-year-old startup that wants to bring a new kind of artificial intelligence to process automation called imitation learning and whose $16 million Series A round was led last year by Lightspeed Venture Partners. According to Sim, Chowdhry was introduced to the firm through an advisor when he had not a lot to show. Chowdhry now oversees 50 people. Says Sim: “We told him, ‘It’d be great if you [find] a cofounder,’ but we just never got there.”

A large part of Boldstart’s secret sauce ties to the type of advisor who connected Chowdry to the firm. It’s all part of Sim calls a “leveraged model,” meaning that Boldstart relies heavily on decision-makers like Fortune 500 CTOs who are invited to invest in Boldstart and not charged management fees in exchange for their council. “Their deep understanding of what large companies are doing [and our] understanding of what founders are doing” is a powerful combination, he suggests. (Worth noting: many other firms are using the same smart model, including YL Ventures and Illuminate Ventures.)

Of course, the question begged is whether more capital will make it necessary for Boldstart to write slightly larger checks and thus move away from funding founders with little more than idea. On this front, Sim insists the answer is no. “We’re not going upstream. [More money] just gives us more flexibility. The idea is still to write early checks of between $250,000 to $2 million in a founder with a vision, mostly at the pre-product stage, where we can even help founders start their companies.”

It certainly helps if the founder already knows well the pain point they are chasing, as has been at the case at a number of its other portfolio companies that have been nailing down follow-on funding. Some of these other bets include Kustomer, a SaaS platform focused on customer service that closed a Series D round in May led by Tiger Global; BigID, a company whose software helps companies meet privacy regulations around customer data and closed a Series C round in September led by Bessemer Venture Partners; and SecurityScorecard, a cybersecurity risk-monitoring platform that closed a Series D round in June.

“If you’re a college student, you don’t understand how enterprises work,” says Sim. “You have to have launched or acquired and implemented new products. We back a lot of people who come out of industry for that reason. You kind of need to have lived that experience.”