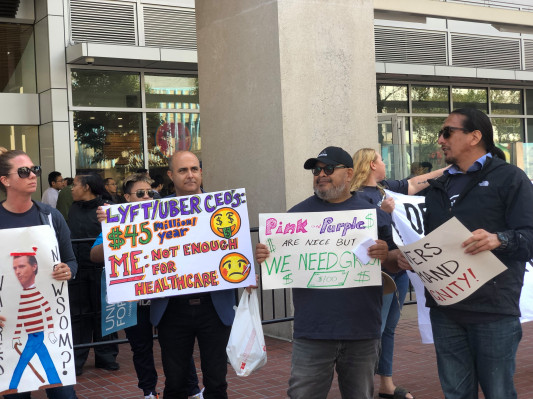 
On the heels of a driver-led protest outside Uber’s San Francisco headquarters, where drivers showed their support for gig worker protections legislation (via Assembly Bill 5) and demanded a union, Uber is circulating a petition urging people to “protect ridesharing in California.” In the petition, Uber advocates for a policy that would offer drivers a minimum of $21 per hour, paid time off, sick leave and compensation if they are injured while driving, as well as a collective voice and “the ability to influence decisions about their work.”

“We agree with the bill’s goal to protect workers, but we don’t agree that this protection should come at the cost of the flexibility our community relies on to supplement their income, support their families, and set their own schedules,” Lyft wrote in its petition. “After talking with thousands of California drivers and listening to experts in labor laws, we’re proposing a revision that protects driver earnings and the flexibility to earn when and how you want. Our proposal includes additional workplace protections for drivers and a minimum earnings floor.”

I’ve reached out to Gig Workers Rising, one of the organizations responsible for bringing drivers together to support AB-5 and demand the right to unionize. I’ll update this story if I hear back. But, based on the organization’s recent tweet, what Uber is offering isn’t enough.

“$21 isn’t a living wage for any category of worker in the San Francisco metro area except a single adult or two adults living together,” Gig Workers Rising tweeted. “What they’re offering is the floor, while hoping to kneecap any efforts to raise wages down the line & create a real union.”

These petitions are clearly Hail Marys by Lyft and Uber to try to prevent the passage of AB-5, which seeks to codify the ruling established in Dynamex Operations West, Inc. v Superior Court of Los Angeles. In that case, the court applied the ABC test and decided Dynamex wrongfully classified its workers as independent contractors based on the presumption that “a worker who performs services for a hirer is an employee for purposes of claims for wages and benefits…”

According to the ABC test, in order for a hiring entity to legally classify a worker as an independent contractor, it must prove the worker is free from the control and direction of the hiring entity, performs work outside the scope of the entity’s business and is regularly engaged in an “independently established trade, occupation, or business of the same nature as the work performed.”

In short, AB-5, which has already passed in the California State Assembly, would ensure gig economy workers are entitled to minimum wage, workers’ compensation and other benefits.